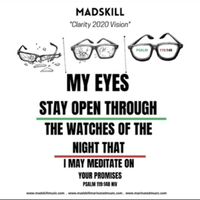 Ken Wright III grew up in Altadena, California and was raised at Victory Bible Church in Pasadena. Ken’s father was a jazz musician (keyboards) and young Ken was exposed to an array of genres growing up which helped him develop an eclectic taste in music. He honed his lyrical skills freestyle battling and performing locally around the Los Angeles, Orange County and Riverside areas.

In August 2002, he rededicated his life to Christ and re-examined his focus and lyrical content. M.A.D.S.K.I.L.L. was born. Inspired by the Holy Spirit M.A.D.S.K.I.L.L. strives to share the uncut, uncompromising Word of God.

The controversial single “Jelly Fish” is the second release from his highly anticipated album, “Clarity 2020 Vision.” It is a powerful yet incredibly insightful song putting a glaring spotlight on those who profess to be Christian yet exude something contrary. This one is guaranteed to stimulate conversation while causing uncontrollable foot taps and head nods!

Spineless/ mindless/ swayed to wherever the time is/ masquerading/ salvation/ different than Jesus Christ’s is/. Claiming Christian/ with pretenses/ you mention the Bible says something different/ than the messiah had given the apostles when they were living/ convoluted contradiction/ excepting sin in/ any form is your religion/ with intentions/ create indifference/ confuse as many/ into sin/ sent in/your vision/ repentance is needed/ but no chance you’re gonna give it/ arrogance in/ full effect/ infiltrated your whole system/ mind imprisoned/ opposite of wisdom/ a henchmen/ not knowing youve been/ used by the enemy for heavy lifting/ pull the lynch-pin/ keep resisting/ God’s provisions/ I say Jelly fish him/
——————————-
(Hook)
“Jelly fish em, jelly fish em, the opposite of wisdom.... I say Jelly Fish em/ made decision of indecision/ Christian Chicken/ bending/ wherever the cultures living/ if their sinning/ makes no difference/ then I say Jelly Fish em/

Although no truth they bring you/ if your not careful best believe dood/they will sting you/ don’t let em bleed you/ of that joy the Holy Spirit breathed in you/ seeds been strewn/ all over the concrete in full view/ of the enemy who pursues/ those skewed/ in what truly Christ can do/ to a life renewed/ whose/ walked in your shoes?/ the J the E the S the U/ that’s who/ S yes He turns gloom/ to skies of Blue/ so ill just keep on walking with my limp like Jonathan would do/ on cue/ abused/ misused/ when Christ didn’t do what The world wanted Him to/ You assumed I’ll end up as fodder food/ if I follow the path He laid out in truth/ but with so much gratitude perfumed of frankincense and myrrh/ Christ encourages me to stay in His Word when this occurs/ don’t defer/ the enemy would like my speech to slur/ punch drunk/ from them trying to debunk/ the Holy One/ with this new age junk/ not happening chump/ your arguments undone/ from first John chapter 4 verse 1/ then look at the 3rd verse just for fun/ un spun that web of lies that you brung/ smelling like dung/ cuzz I’m confident of the Holy Son/ when He hung/ paid the price for what I’ve done/ but some/ still insist to resist Him/ so I say jelly fish em/ once again/ I say jelly fish em/
———————
(Hook)
“Jelly fish em, jelly fish em, the opposite of wisdom.... I say Jelly Fish em/ made decision of indecision/ Christian Chicken/ bending/ wherever the cultures living/ if their sinning/ makes no difference/ then I say Jelly Fish em/

“Dear friends, although I was very eager to write to you about the salvation we share, I felt compelled to write and urge you to contend for the faith that was once for all entrusted to God’s holy people. For certain individuals whose condemnation was written about long ago have secretly slipped in among you. They are ungodly people, who pervert the grace of our God into a license for immorality and deny Jesus Christ our only Sovereign and Lord.